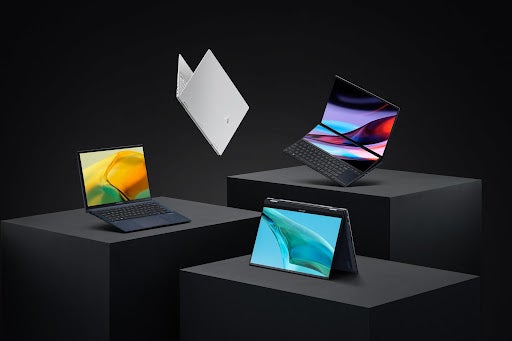 Asus has unveiled a new line of laptops that have been designed with creatives in mind, offering new 12th generation Intel processors and powerful Nvidia GPUs. This is what the latest Asus laptop looks like.

Asus has unveiled a new lineup of laptops this year, with many aimed at the creative community. Read on to see the newly revealed laptops, and let us know which one you’re most looking forward to Twitter.

Asus Zenbook Pro Duo 14 OLED has a 14.5-inch screen that reaches a resolution of 2.8K and a refresh rate of 120Hz. The company claims that the screen can also reach 550 nits of brightness, with Dolby Vision support and touchscreen capabilities.

As the name suggests, it also has a second screen that sits right above the keyboard, allowing you to multitask or even use it as a toolbar for the likes of Adobe Premiere Pro.

The laptop is Intel Evo certified, with the flagship model offering up to a 12th generation Intel Core i9-12900H CPU alongside a creator-grade Nvidia GeForce RTX 3050 Ti GPU. Asus claims that the Zenbook Pro Duo 14 OLED will be capable of intensive graphics tasks, such as 3D rendering and video editing, with up to 32GB of RAM and a 2TB SSD available to ensure no memory or storage bottlenecks.

Even with all these features, this laptop weighs just 1.7kg, making it a good contender for anyone working from home and the office, while packing a 76W battery. The Zenbook Pro Duo 14 OLED will be available in May and will start from £1299.99.

Vivobook Pro 15X OLED has a 15.6-inch display that has a refresh rate of up to 120Hz, a resolution of 2.8K and an aspect ratio of 16:9. Asus claims that this laptop can achieve a brightness of up to 600 nits, with a thin bezel NanoEdge display that is Pantone Certified and certified True Black to ensure accurate color performance.

The Vivobook Pro 15X OLED features the Asus Dial, which is a virtual rotary control on the touchpad that makes it easy for users to make small adjustments when in selected Adobe creative software. You can also create custom functions for the Dial through the ProArt Creator Hub, as well as access other settings and features including performance modes and screen calibration.

This laptop can go up to a 14th generation Intel Core i9 processor with 12 cores, along with an Nvidia GeForce RTX 3070 Ti GPU, which offers support for ray tracing and AI-powered video editing, which should allow creators to edit, create or stream their creations faster and more detailed.

The Zenbook Pro 16X OLED is a new all-metal laptop aimed at creators, and according to Asus, is the most powerful Zenbook yet. It features a new AAS Ultra mechanism with a 14.5mm keyboard lift that allows the CPU and GPU to run at a combined TBP of up to 140W in unthrottled Performance mode, as it allows 30% more airflow than previous generation laptops.

It also has an updated Asus Dial, which is a physical rotary controller that provides fingertip control in most of the leading creator applications. It’s 3.2mm thin and glass-encased for a smoother feel, making it easy for users to quickly change their brush size, increase saturation or undo actions.

The Zenbook Pro 16X can be paired with a 12th generation Intel Core i9 CPU along with an Nvidia GeForce RTX 3060 GPU, which benefits from the new Asus IceCool Pro cooling system, which allows hot air to be efficiently expelled from the machine.

The Asus Zenbook Pro 16X OLED will be available from June in the UK. We will be sure to update this article when we know the price.

The Vivobook S laptop is known to be among the thinnest and lightest devices in the Vivobook lineup, with the S 14 coming with a 14-inch display and a metal cover. You can find this laptop in Indie Black, Neutral Gray or Brave Green with a raised logo tab on the lid.

The laptop can be configured with up to a 12th generation Intel Core i7 processor or AMD Ryzen 9 series CPU, along with Intel Iris or AMD Radeon graphics, with up to 16GB RAM and 1TB SSD. These powerful internals result in benchmark performance that is claimed to be up to 2.1 times faster than the previous generation.

The Vivobook S 14 has a 180-degree hinge that can bend back for versatility, alongside a powerful Harman Kardon certified audio system and Asus AI noise cancellation technology, which is perfect for anyone who knows they’ll be doing Zoom calls every day.