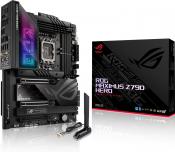 For the Z790 there will be at least 13 different motherboards available from Asus, with more from the ProArt series arriving soon. They will use the latest Intel Z790 chipset and Asus technologies such as AI Overclocking to quickly increase performance and AI Cooling II to optimize your PC for optimal heat and noise levels. There are two motherboards in the Maximus series: ROG Maximus Z790 Extreme and ROG Maximus Z790 Hero. Both are designed for enthusiasts who want great hardware, whether it’s to set new overclocking records or play games without compromise. Even the main PCIe x16 slot reflects this, as Asus leaves enough for up to a four-slot graphics card. The motherboard uses eATX format with 20+1 phase architecture. The wide M.2 compatibility of the ROG Maximus Z790 Hero provides many possibilities for installing high-speed storage arrays. It all starts with the included ROG Hyper M.2 add-in card, which lets you attach up to two M.2 drives—one PCIe 5.0 and one PCIe 4.0—in the board’s second PCIe 5.0 x16 slot. Additionally, the board includes three onboard PCIe 4.0 slots to expand your storage space even further.

Last month at Intel Innovation, Intel introduced the 13th generation of its Core processor family, led by the 13th generation Intel Core i9-13900K, their fastest desktop CPU. There are six unlocked 13th generation Intel Core desktop processors available, with clock speeds running up to 5.8 GHz over a maximum of 24 cores and 32 threads. We’ve tested a lot of Z790 motherboards, so for HERO we decided to see if we could make a change, since it’s compatible we’ll use DDR5 7200 MHz from TeamGroup. Frequency parameters for Intel XMP 3.0 range from 4,800 MHz to 7,200 MHz for their memory, and gamers can access Intel XMP 3.0 OC capabilities directly from their system BIOS. With that said, let’s take a closer look at the platform and then go to the test.

ASUS Maximus Z690 Hero review
ASUS is back in the game, this time with another HERO, in the form of the Z690 motherboard, to be exact. This Alder Lake motherboard is loaded with features and gadgets, and it’s dressed to impress…