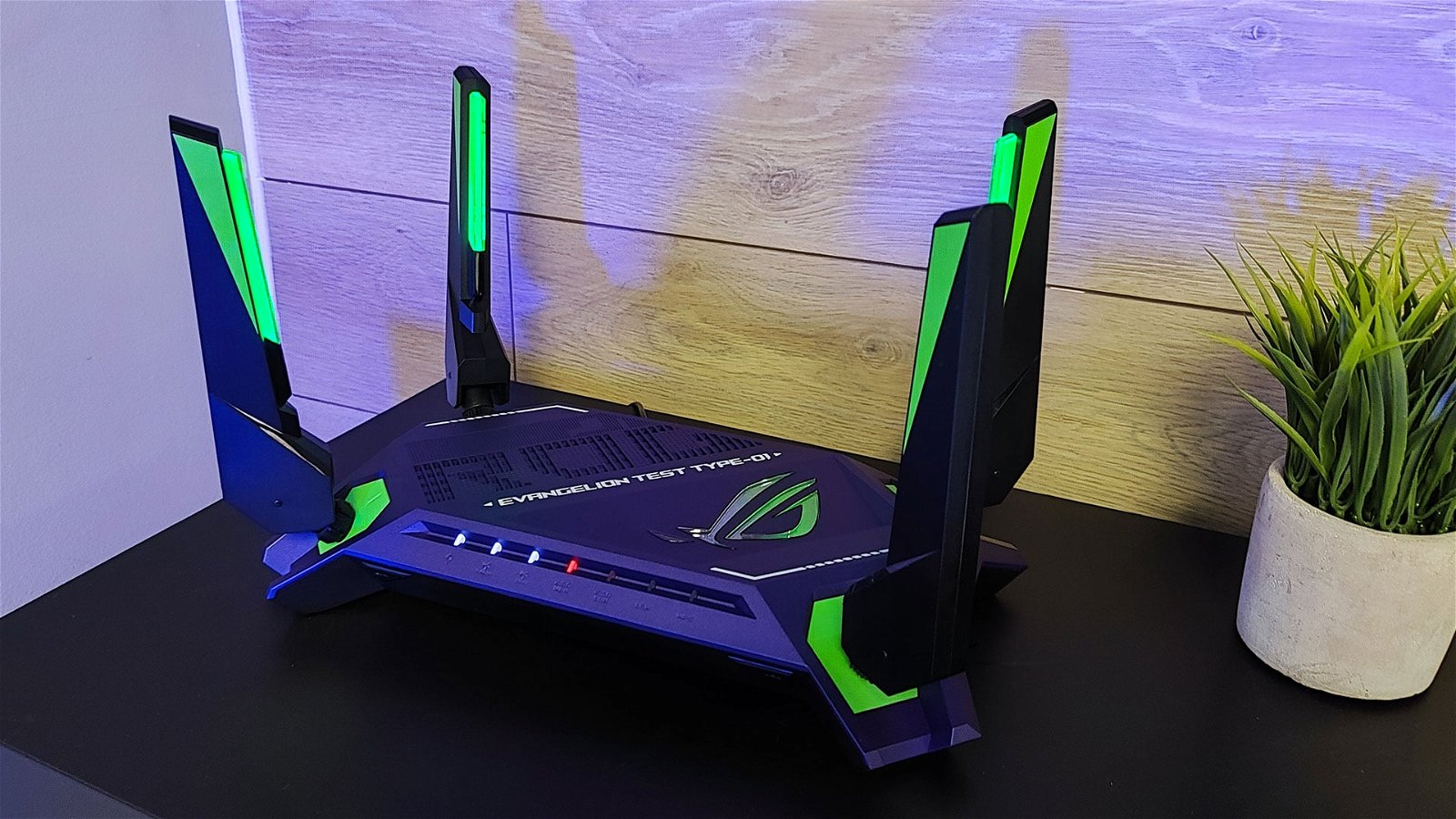 I have to admit, I’m a fan of the Asus ROG Rapture GT-AX6000 EVA Edition. The project that saw Asus ROG do a variety of gaming devices with Evangelion 01’s iconic color scheme is one of the weirder collaborations I’ve seen. With motherboards, graphics cards, monitors and PC accessories all in the range, anime fans can finally have a new way to enjoy their fandom. Even with its ridiculous range nature, the Asus ROG Rapture GT-AX6000 EVA Edition is a solid router that delivers the way it needs to too, and looks good doing so.

The Asus ROG Rapture GT-AX6000 Evo Edition is a horizontal wireless router with four adjustable antennas, four 1GB ports, dual 2.5G Ethernet ports, with 1 USB 3.2 Gen and 1 USB 2.0 port along the back of the unit. It has a bright green LED light that adorns the antenna and the ROG eye will also glow based on the status of the router. As with all the ROG range of routers, it has an impressive feel but will look great next to a gaming PC or other hardware.

What makes this model special is Evangelion color scheme, which is interesting and potentially interesting if you’re an anime fan. Honestly, I don’t know why you’d want to get the Asus ROG Rapture GT-AX6000 EVA Edition over the standard, unless you’re a fan. From the look on the surface to the router’s menu, this is a device made to appeal to very select fans. I personally enjoy what ASUS has done with the GT-AX6000, it feels unique and has enough Eva flair to be instantly recognisable, especially with the words Evangelion Test Type 01Test Type 01 on the top.

Outside Evangelion style, the ROG Rapture GT-AX6000 is a well-specced router that has all the ports you’d expect from a gaming device in 2022. The 2.5 Gigabit LAN and WAN ports are nice to see, especially as more devices are pushing well past 1GB. The placement of all the ports on the back works well, ensuring you can plug and hide everything, never taking away from the look of the ROG Rapture GT-AX6000, Evangelion inspired or otherwise.

Under the hood, the ROG Rapture GT-AX6000 is well-positioned to handle a variety of networking tasks, including competitive gaming. It has a powerful 2GHz dual-core processor, 1GB of RAM and 256MB of Flash memory. There are physical buttons on the back for power, Wi‑Fi password and Reset. The LED control panel is located in the upper right corner of the device. It runs on the ASUSWrt operating system found across the entire line of Asus routers, with the Eva edition featuring an anime-inspired theme.

The ROG Rapture GT-AX6000 features an impressive array of wireless specs that should satisfy most people’s needs. The router is a dual-band 802.11ax router with a single 2.4 GHz band that supports up to 1148Mbps and a single 5 GHz frequency that supports up to 4804 Mbps. The ROG Rapture GT-AX6000 Eva Edition should meet most gamers’ needs, but it’s disappointing to see it limited to dual-band, especially when the competition is pushing tri- or even quad-band offerings that make this one feel lacking in comparison.

With 802.11ac Wave 2 MU-MIMO technology, ASUS RT-AC68U AC1900 Dual Band Gigabit Router offers speeds up to 3x faster than previous models. It also features beamforming for better coverage and reception, including adaptive QoS to prioritize traffic. and can be configured as part of the Airtime Mesh Wi-Fi system. Overall, Asus includes most of what you’d want from a router in this range, even bringing Wi-Fi 6 to the table, something I’m happy to see, especially with more devices coming out that support the new standard.

Unboxing and setting up the Asus ROG Rapture GT-AX6000 EVA Edition is painless and intuitive. Once you have everything installed, with the modem and device plugged into their respective ports, you just open the setup page and go through the steps. The interface will walk you through each step of the process, prompting you for your network name, password, and even updating things to make sure everything is running smoothly. From unboxing to running takes 10 minutes, although more time can be spent if you want to fine-tune some of the more advanced settings.

Once everything is installed, you have a variety of options to explore, including network traffic monitoring and game preferences. If you’re like me and you want the best online experience, this is where you want to dive in, with Asus including a variety of options to get the best experience possible. For most users, Game Boost for game pack priority is the thing that most often needs to be turned on. Even with today’s Wi-Fi speeds, I still recommend a dedicated LAN connection for gaming, but gaming boost is the best way to overcome network congestion to get the best speed possible.

“The Asus ROG Rapture GT-AX6000 EVA Edition is one of the fastest and most robust Wi-Fi 6 gaming routers we’ve tested this year.”

Asus ROG Rapture GT-AX6000 EVA Edition also has various security features and parental controls that can further customize your network to meet your needs. Not all of these settings will be used by everyone, or necessary for that matter, but ASUS has laid out everything in a way that’s easy to understand, while still providing enough customization for power users to immerse themselves.

In our network tests LAN performance was impressive, holding its own against some of the more expensive offerings from Linksys, Netgear and TP-Link, delivering data quickly even with congested networks. On the wireless side of the router, we saw speeds of 940Mbps on the 5Ghz band, providing great speed anywhere in the office test environment. As we moved past the ideal range, speeds dropped, dropping to around 800Mbps, although still good for wireless at the router’s coverage area level.

Mobile gamers are ready to enjoy with consistent speed and the ROG Rapture GT-AX6000 range is great when it comes to online gaming. I tried Fortnight on a ROG Phone 6, and I never noticed any slowdown due to network performance. Jumping to the laptop, the same consistent speeds were seen across all the games we ran through our tests. The CPU at the core of the router keeps things running smoothly, even during congested networks.

Overall, the Asus ROG Rapture GT-AX6000 EVA Edition is one of the fastest and most robust Wi-Fi 6 gaming routers we’ve tested this year. There’s a reason ASUS is part of the upper echelon when it comes to gaming routers. The software works well, the router delivers enough signal to cover most homes and the extra features just add to the overall great package. For Evangelion fans who like to play online, I can’t think of a better combination than the Asus ROG Rapture GT-AX6000 EVA Edition, it just works and looks good to do so.