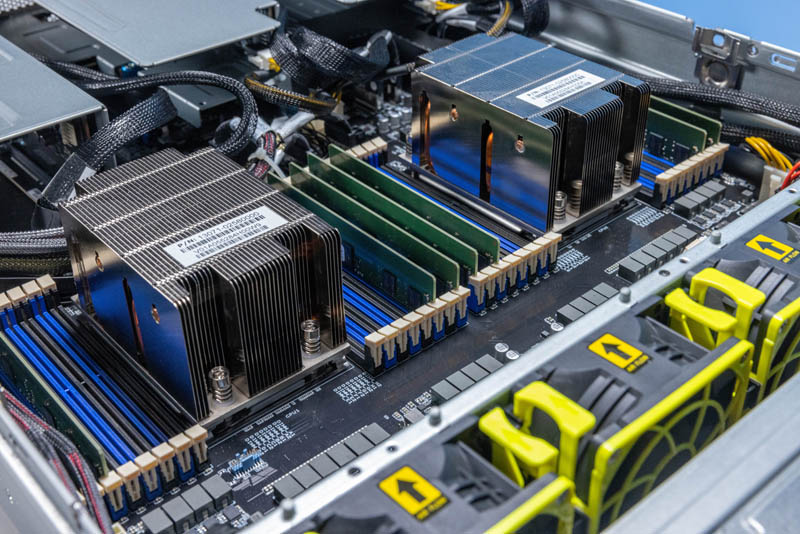 Today we will look at the ASUS RS720A-E11-RS24U. The server itself is an AMD EPYC 7003 (and EPYC 7002) dual-socket platform. If that model number sounds familiar, it should. We reviewed the ASUS RS720A-E11-RS24U GPU version a while back. In ASUS naming convention/modelling, the GPU version we tested with the 4x NVIDIA A100 is the same model number as the standard server edition we reviewed today. This version is less optimized for high-end GPUs and more optimized to provide a large number of PCIe expansion slots. With that, let’s get to the review.

We will not make a video of this server because we have checked the GPU version which you can see here:

Much around the cooling, the back of the unit and the riser are different, but the drive and motherboard are similar enough that we don’t think it’s worth doing another review. Also, management is effectively the same in both systems.

The front of the system has 24x 2.5″ SSD bays. This is configurable, and ASUS has options behind this space for things like SAS expanders.

On the left side, we get the ASUS logo and two USB 3 Type-AS ports. We also get the little ASUS pull handle we’re used to. This folds back when closing the rack, but it makes it easier to pull the system out of a densely populated rack.

On the right we get our power, reset and chassis ID buttons, along with various status LEDs.

The 2.5″ tray is great because the same tray can be used for SATA, SAS and NVMe drives. ASUS also has a tool-less design for this where it just pops the drive into place.

On the right, we have a redundant 1.6kW PSU. We also have full height expansion slots. The little blue screw knob is there to hold the rung in place. No small screws make this chassis easier to work on.

In the middle, we get the standard rear I/O panel for ASUS. There is a QLED function that shows the status of BIOS entries. Then there’s a VGA port, two USB ports and an out-of-band management port. The two RJ45 ports here are via the optional dual 10Gbase-T Intel X710 module. There’s also a quad 1GbE option available, or one can simply get no onboard networking. We will show this module in the PCIe riser section.

The riser in this section is a low-profile riser and two full-height expansion slots.

On the right, we get four full-height steps. This is the main difference part because in the previous unit we reviewed there was an NVIDIA A100 GPU here and a fan unit.

Next, let’s get inside the chassis and see what makes this server work.