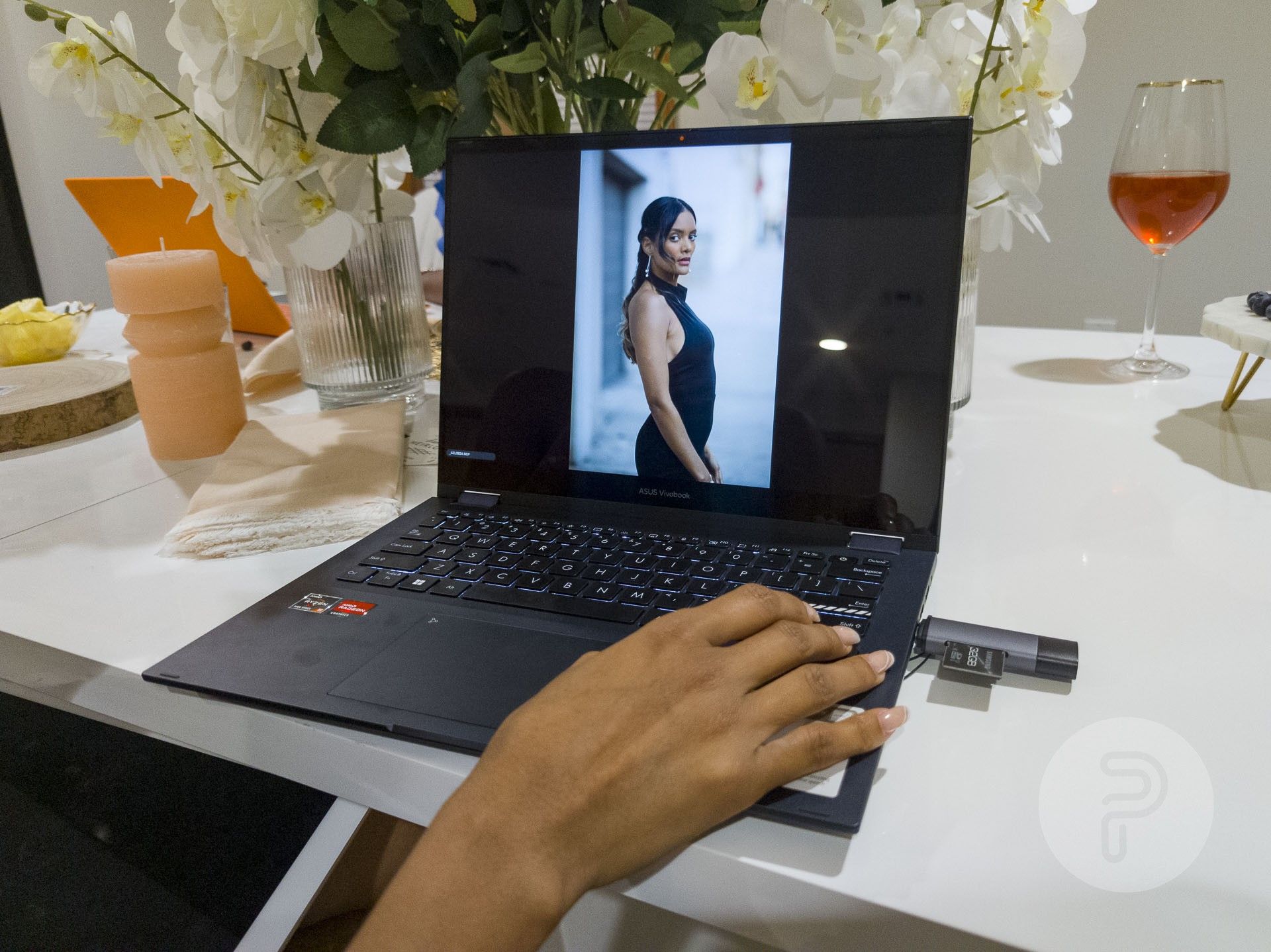 Tablet PCs can be changed now with Antibacterial Protector

The ASUS Vivobook S 14 Flip has an excellent budget-friendly price point of about $676 while still including a 360-degree hinge and a touchscreen to convert the laptop into tablet PC mode. That’s nothing new for the ASUS Vivobook Flip series. Something new with this series and some other Vivobooks is the Antibacterial Guard coating. The new Antibacterial Guard is a silver ion coating applied to certain parts of laptops such as the keyboard, touchpad, palm rest and fingerprint sensor. It has been shown through ISO 22196 testing to inhibit bacterial growth by over 99% within 24 hours and is supposed to provide protection for 3 years.

What’s in the Box

The packaging offers environmental friendliness which is very important nowadays. It does use a lot of cardboard, but it’s plain brown recyclable cardboard with a simple black ink print, so we’re not going to waste a lot of money on expensive glossy full-color printing here.

Besides the laptop itself and some printed documentation/warranty papers, we have a nice rectangular 240 volt barrel-shaped power charger. Personally I prefer cylindrical barrel shaped chargers because there is no need to align the ports a certain way. It’s a circle, so no orientation is needed; just point and push. It’s easier than a USB-C charger.

The display isn’t as good as some of the displays on other ASUS laptops (like the ones with OLED displays). Of course, you have to cut costs somewhere to get to the desired price point, so that seems to be the case here. It’s glossy so there’s glare and the colors are more muted with lower contrast than other displays, but again we’re talking about cost savings here.

Having a 360-degree hinge on the laptop means we can also use it in “tent mode” for a smaller desktop footprint and easy touchscreen interaction.

You can also fold the keyboard completely and use the ASUS Vivobook S 14 Flip in Tablet PC style. Unfortunately this model does not include a pen for more precise interaction, but the screen supports ASUS Pen 2.0 with 4,096 levels of pressure sensitivity if you want to buy it separately.

Here you can see the back of the Flip hinge. The hinged bridge is more shiny and smooth for some reason, but I like this design choice. ASUS Vivobook S 14 Flip has a thickness of about 18.9mm and weighs 1.5kg.

On the left side with a large fan exhaust grill and a full USB 2.0 type A port. You’ll definitely want to use it for devices that don’t need too much speed, such as mouse accessories or tablet pens.

At the bottom we have a large ventilation grill for airflow along with some rubber feet to put some space between the bottom and the desk or table. ASUS calls their cooling technology “IceCool”, which uses 8 & 6 mm heat pipes, and a 97-blade “IceBlade” fan with an impeller made of liquid crystal polymer for lighter and thinner hardware but quieter and more efficient airflow .

Under heavy load, the “IceCool” cooling system works well… at least on the left side of the laptop. I can still get the right side to be quite warm.

On the back of the hood there is a small raised logo area that is attractive. I can’t think of any reason for it to be brought up. There is no tactile advantage nor does it provide any additional damage protection.

The raised logo area pops up with some hashtags, which is a bit silly to me. One word #GoFurther which links to college sports, travel companies and Ford car merchandise on Twitter. Others say #BeFearless link to lots of police videos about sniffing people out with fireworks at this time.

You’ll also notice the “cool blue” color changes significantly depending on the lighting. Above, it looks more gray. Sometimes it looks blacker, but with the right light, you’ll see the blue shine through. I really like this about the finish here. It’s a subtle color change, but it looks really nice when you look at the blue.

While the keyboard is pretty basic, there are some minor improvements over the horrible flat-key chick-style keyboards that have become standard on laptops these days. This keyboard actually has a slight (0.2mm) concave/convex ergonomic shape on the keys. It’s not as good as the thicker keyboards we had 20 years ago, but it’s a step in the right direction. We also have a nice 1.4mm of key travel for that nice tactile feedback.

You’ll also see some engraved “Harman/Kardon” branding as well as some interesting design accents in the keyboard. I don’t know why the Enter key has a zebra stripe on it, but that makes it stand out quite a bit visually. It’s an interesting design choice and I love the unique style.

The power button between the Print Screen and Delete keys on the top row also has a nice trick. It works as a fingerprint scanner for biometric login AND it supports fingerprint scanning on boot, so that when you press a button to turn on the laptop, authorization is sent directly to Windows and you’re logged in instantly. It’s similar to what Huawei first did with the Matebook X in 2017 and it’s great. See: Huawei MateBook X review: thin, light and looks good | Pocketnow In my opinion, all computers should work like that.

The trackpad also has another great trick. There is a small icon in the upper right corner of the trackpad that will turn on the backlit number pad. Sliding your finger on the trackpad still lets you move the pointer around, but now you also have a very convenient touchpad for numerical operations. The top-right corner icon enables this for any app, while there’s another icon in the top-left corner of the trackpad that changes the backlight brightness level, or if you tap and slide the icon, it launches the calculator app.

While some parts of Windows 11 can be customized, many of the options and capabilities you used from Windows 10 and below are gone. Fortunately there are many third-party tools to fix it such as: ExplorerPatcher, StartAllBack and Stardock Start11.

There is a MyASUS program included on the Vivobook Flip that includes many customization options as well as promotional offers. Customization options have a lot to do with hardware. For example, you can change options on cooling fan performance to get a cooler system versus a quieter system. You can also change noise cancellation options, health/battery charging options, connectivity options, touchpad and function key options. ASUS also includes links to some other interesting utilities such as their GlideX app which allows screen mirroring and connection across devices. There is also a selection of phone link software and file transfer utilities.

There are also some bloatware programs that come with Windows 11, but the desire for these will definitely vary by user as some are very popular. ASUS Vivobook Flip comes with things like Spotify, Disney+, WhatsApp, Prime Video, Tik Tok, Instagram and Facebook Messenger. They are pretty easy to uninstall though.

A McAffee antivirus trial is also included, but personally I’d uninstall this and use the built-in Windows Defender antivirus instead so I don’t have to worry about paying extra when the trial is over.

I installed a bunch of graphics and photography programs on the ASUS Vivobook S 14 Flip as well because of the field I work in a lot. ASUS includes a 15% discount on Adobe Creative Cloud subscriptions. I definitely had to hold back on some tasks due to the 8Gb memory and only 512Mb GPU memory. If I push too hard, I might get GPU errors in things like Adobe Camera RAW or Adobe Photoshop. I think this is just a hardware limitation, so if you’re going to be working with graphics or gaming or other high-end tasks, you’ll want to stay within the hardware’s capabilities (or buy a more expensive model that’s more likely to handle what you need to do.) To clarify, if you edit 1-10 photos at a time, the Vivobook S 14 Flip will handle it well. If you want to edit 1000 photos at a time, you should look for something more expensive.

In terms of battery life, the ASUS Vivobook S 14 Flip is pretty good. Obviously, results may vary depending on your settings and usage. Reducing usage, screen brightness and other battery saving features can give you over 10 hours of battery life from a 50 watt-hour battery.

The ASUS Vivobook S 14 Flip is a convertible tablet PC for under $700. It’s all about value here because of course there are better laptops and convertibles for higher prices, but for under $700 you’re getting pretty great performance, battery life and build quality along with a form factor that can you only use it while standing & walking as well as while sitting at the table. The ASUS Vivobook S 14 Flip may be perfect for high school students as it can certainly handle browser-based educational applications as well as some light professional applications.

Special thanks for photo appearances by Raquel Gerlani and Juliet Sun.

The Asus Vivobook S 14 offers a 14-inch touchscreen display with a 16:10 aspect ratio. It is powered by AMD’s Ryzen 5 5600H Mobile Processor and features 8GB of RAM with 512GB of SSD storage. It runs on Windows 11 out of the box. Check out all the deals below.