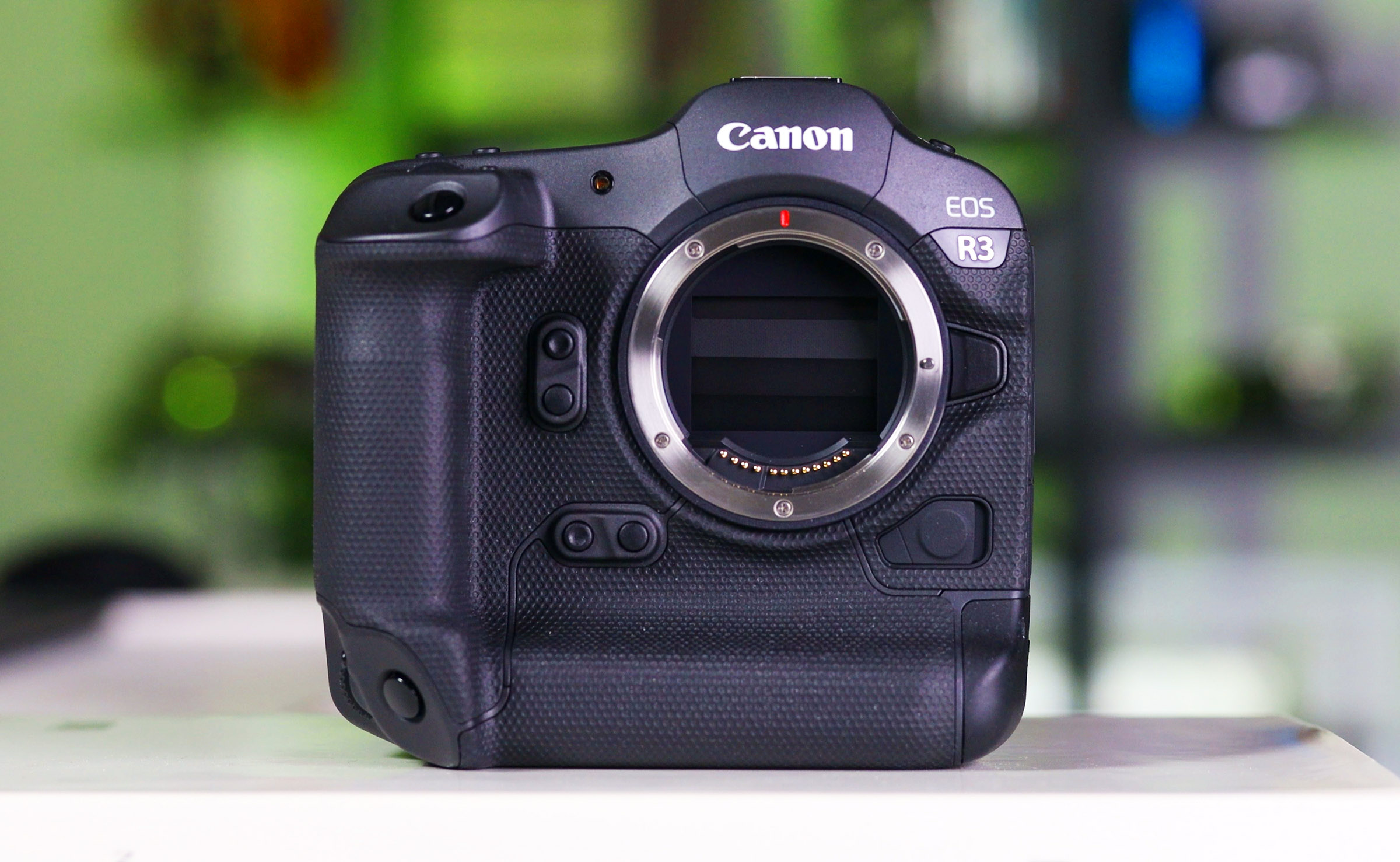 After Sony released the A7 III in 2018, I wondered if Canon and Nikon would be able to catch up on autofocus and other technologies. Since the launch of the 24-megapixel EOS R3, however, it’s Canon’s “eye control” AF that allows you to focus on a subject only by looking at it.

The R3 is also Canon’s first camera with a back-illuminated, stacked sensor. This gives it a silent shooting speed of up to 30fps with autofocus and auto-exposure enabled. Additionally, it has top flight video specs with RAW recording at 6K up to 60fps. 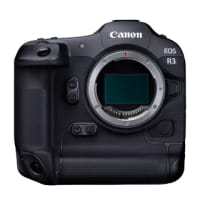 Here’s the rub: for $6,000 it has a relatively low resolution, while Canon’s own 45-megapixel EOS R5 costs less than $2,000. So who is this camera good for? And is Eye Tracking AF a useful feature or just a toy? With some help from my pro photographer friends, I spent some time with the final production model to find out.

The first thing you’ll notice about the R3 is the large camera body that makes it look like a mashup of a DSLR and a mirrorless camera. Like the 1DX Mark III that inspired it, it has dual controls for both landscape and portrait shooting modes, including a corresponding shutter button, dials and joystick.

Despite its large body, the EOS R3 is relatively light at 2.3 pounds including battery and memory card. The 1DX Mark III, by contrast, tips the scales at 3.17 pounds, while the EOS R5 is 1.6 pounds.

As you’d expect a big camera, it has a big case. That creates a sense of security when you’re holding it, and it works well even with larger telephoto lenses like the Canon RF 70-200mm f/2.8.

The R3 has a lot of dials and buttons so you can operate the camera without having to dive into the menu for the most part. The control layout is the same as the 1DX Mark III and uses the same infrared control button. That allows you to set the focus point by sliding your thumb over it – faster than a joystick, but easier until you get used to it.

A separate button lets you easily switch between photo and video modes, giving you separate settings and menus for each mode. However, it uses the same old Canon menus that aren’t quite as recognizable as the latest models from Sony, Nikon and Panasonic. Although you can control it in different ways using dials, joysticks or touchpads. That makes it quicker to access settings once you know where they are.

The larger 3.2-inch touchscreen display has a crisp 4.15 million dot resolution, nearly double that of the R5. It’s very responsive for scrolling through menus, browsing photos, and more—much more responsive than the Sony A1 or any other camera I’ve tested for that matter. The display also comes out great for low-angle shots or vlogging, though the R3 is a bit heavy for the latter.

The 5.76-million-dot OLED EVF offers a similarly sharp and smooth 120 Hz refresh rate. Up to 9.4 million points on paper, the 240Hz EVF doesn’t stack up against the A1, but to be honest I can’t see much of a difference between them.

It uses the same massive LP-E19 battery as the 1DX Mark III, which provides up to 620 shots per charge, or two and a quarter hours of 4K 30p video recording. Depending on how you shoot, however, you can easily exceed those figures.

For storage, you get one fast CFexpress Type B and one SD UHS II slot. It’s nice to have an SD option if you prefer to shoot with those cards. However, if you want to save the CFexpress card to SD, it will reduce the performance. Since this is mostly a pro camera, Canon should have provided two slots for both like Sony or maybe two CFexpress slots for both.

It has a new Hotel Show interface that supports speedlights and other flashes, as does Tascam’s new XLR 4-channel microphone interface. That ultimately matches what Sony and Panasonic have offered over the years.

The trusty micro HDMI port isn’t ideal for video shooters, and it’s an odd decision considering Canon had room for it with the R3’s larger body. It also comes with USB-C for data transfers and in-camera charging, though you’ll need another optional accessory if you want to rotate the camera externally while you’re shooting.

Now, let’s talk about Canon’s new eye tracking feature. It’s only really worth it if you fix it, but luckily it’s easy to do – you’ll only be looking at five points. Depending on whether you wear glasses and contacts, or even for different environments, you can often adjust it. Fortunately, you can save up to six different settings.

Once it’s fixed, I can choose what I want to focus on just by looking at it. Even if the eye tracking circle wasn’t on a subject, the automatic would usually pick it up if it was close. From there, it starts tracking the face, eyes or subject as needed to track the subject.

It also worked in difficult environments with lots of subjects or movement, although it went off once you hit the focus button and started shooting. It worked fine for me, but not at all for my photographer friend with light blue eyes and astigmatism. So if you are interested in the feature, you can try it before making a purchase, because it seems that the functionality depends on your eye color and other factors.

First of all, the EOS R3 is a speed demon. This starts with the shutter, which goes up to 1/64,000th of a second in electronic mode, faster than any consumer camera. It also supports the fastest bursts we’ve seen, up to 30fps in silent mode or 12fps with mechanical shutter. As with some recent Sony models, you’ll only get those full speeds with uncompressed and lossy RAW files.

You can take more shots in those modes too. At 30 fps with the electronic shutter, you can shoot 150 shots to an SD UHS II or CFexpress card before the buffer fills up, according to Canon. However, after the 150 frame mark I was able to shoot a lot with the faster CFexpress card, with the shooting speed slowing down slightly. It can handle 1,000 RAW uncompressed photos or more with mechanical shutter before stopping.

Dual-pixel autofocus can keep up with those speeds, so I had very few unsharp photos. Face and eye detection is fast and fluid for humans, although less reliable for animals and birds. The EOS R has a car tracking feature designed primarily for race cars, and unfortunately I didn’t have access to the Bugatti Chiron during testing.

Shooting sports is this camera’s forte, and at a well-lit indoor football game, my pro photographer, Samuel, had only a few out-of-focus shots. The A1 didn’t do as well as it did for birds, but it was still better than most cameras I tested. Overall, the EOS R3 has a very powerful AF system that puts Canon on par with Sony.

The IBIS system offers 8 more shake reduction with supported lenses than any competing camera. That allowed me to take sharp handheld shots at low shutter speeds when shooting in low light. And thanks to the sensor’s fast readout speeds, rolling shots are well controlled and only visible on fast-moving subjects or fast pans.

The EOS R3 may be Canon’s best mirrorless camera for image quality, especially when it comes to dynamic range. The new 24-megapixel sensor offers at least a wider dynamic range than the EOS R5, giving you more room to adjust with RAW images. JPEGs also look great straight out of the camera, with noise and noise reduction well balanced.

Canon’s color science is still the best, delivering stellar accuracy and natural skin tones. As usual with Canon, it has a slight bias towards warm tones.

The R3 also shines in low light. Noise is almost non-existent up to ISO 3200, with hardly any noticeable drop in dynamic range. It’s well controlled up to ISO 12,800, and images at ISO 25,600 and beyond are usable if exposed correctly.

The biggest one is the minimum 24-megapixel resolution. With the 45-megapixel EOS R5 or 50-megapixel Sony A1, you can shoot birds or wildlife at long distances and still have room to crop.