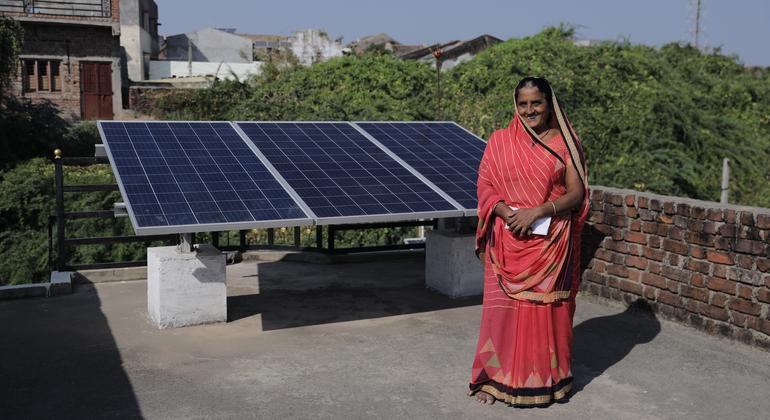 He earns a small income from agriculture which he uses to take care of his family. The government has installed solar panels on his house which has given him much needed relief from household expenses.

“I extra money is now saved to my account. I use that money for the daily expenses of the house, and for my children’s education,” he added.

By taking the electricity bill, Ashaben not only saves the money he used to spend on electricity, but the excess electricity generated is sold back to the grid and he receives money in return.

Renewable energy as a source of income

Converting to a clean, renewable energy source not only allows residents to use home appliances to make life easier, without worrying about an electric bill. It also becomes a source of income for them.

Ashaben Mahendrabhai, 38, lives with her husband and two children. “We work on our farm and we have been paying a lot of electricity for agriculture. Since solar power was installed in our village, we now save a lot of electricity. Earlier our electricity bill used to come around 2,000 rupees. Now it is in the minus,” he said.

With the electricity bill removed, Ashaben not only saves the money he used to spend on electricity, but excess electricity generated is sold back to the grid and you get money in return.

“When we first came with the solar project team, we did not understand this properly, so we refused to install it. We could not read and write to understand what solar energy was and we had little knowledge about it. But little by little, the team made us understand the concept and benefits of solar, how to do it save electricity and moneyafter that we became interested in it,” he said.

Pingalsinh Karsanbhai (right) feels that this project not only provides freedom from electricity bills, but “this saving is similar to our old age pension.”

Local farmers Pingalsinh Karsanbhai Gadhvi and Surajben Gadhvi, married, had a solar roof installed on their house six months ago.

Pingalsinh Karsanbhai feels that this project has not only given them freedom from electricity bills, but its maintenance will also protect them from old age.

“Previously, we used to get an electricity bill of three thousand rand and after the solar system it is now zero. Now we save that 3,000 rupees every month,” he said.

“These electrical appliances have helped the whole village. All institutions such as schools, community centers, all benefit from the sun in the village. In my personal capacity I save 3,000 rupees. Now we don’t need extra power. The whole house is solar powered. “

Residents of India’s first solar village interacting with the UN Secretary-General during his visit.

He said “this savings is like our old man’s pension. We are very happy about it.”

His wife Surajben was smiling and willing to recommend it to other villages.

“If this solar is installed all over the country it will be useful. It feels like the Sun God gives us strength with its light. This help received from our village of Modhera, it must reach the whole country,” he said.

Working with the residents of Modhera during his visit, UN Secretary-General António Guterres praised the efforts of the Government and the residents.

“Here where the Temple of the Sun was built 1,000 years ago, there is New Temple of the Sun. It is based on solar energy. And the fact that solar power is changing the lives of the people of this village, making them healthier, giving them more success, but at the same time, contributing to saving our planet from climate change that is still going on out of control.”

Inspiration from the Sun God

The Modhera Sun Temple in Gujarat, India, is currently running a 3D light show entirely powered by the sun.

Home to Gujarat’s famous Sun Temple, Modhera village is about 97 km from Ahmedabad city in Mehsana district of Gujarat.

With the idea of ​​powering the Sun Temple and the entire village with the Sun God (solar energy), this project is the first of its kind, where the villagers are proposed to be self-sufficient by using green energy.

“The idea behind this project is that the Modhera temple is the Temple of the Sun God, then all the energy for this town and community must come from solar energy“said Mamta Verma, Principal Secretary, Energy and Petrochemicals in the Government of Gujarat.

With the consumption of just one village to two megawatts, i excess is added to the transmission grid.

Public schools, bus stops and utility buildings in the village of Modhera in Gujarat, India, are now powered by solar energy.

“There are three main things in this whole project. One is our 6-megawatt land-based project. The second is a 15-megawatt battery storage system and the third is one kilowatt rooftops installed in 1,300 houses,” Chief Project Manager of Gujarat Power Corporation Limited (GPCL), Rajendra Mistry, explained.

Supported by the Government of India and the Government of Gujarat, the estimated cost of the entire project is $9.7 million. What sets it apart is that Modhera is also the first village to become a renewable energy generator.

Solar panels on the roofs of houses in Modhera, in the state of Gujarat, India.

“This is the first village in India where even at night, the energy used by the residents comes from the solar panel. That is the special feature of this project,” said Vikalp Bharwaj, Managing Director of Gujarat Power Corporation Limited.

A vision of the future

This demonstration project is expected to provide learning to solve the constraints related to renewable energy. If the project proves to be economical, the plan is to replicate it in other rural areas of Gujarat.

“I would also encourage other villages to install solar as it is useful in all aspects, from saving money to saving electricity,” he said. 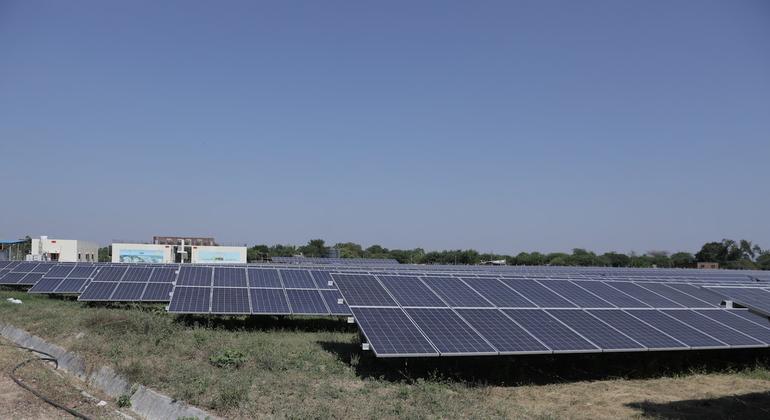 POWER IS THE SUN

The installation of solar panels has benefited the entire village of Modhera.