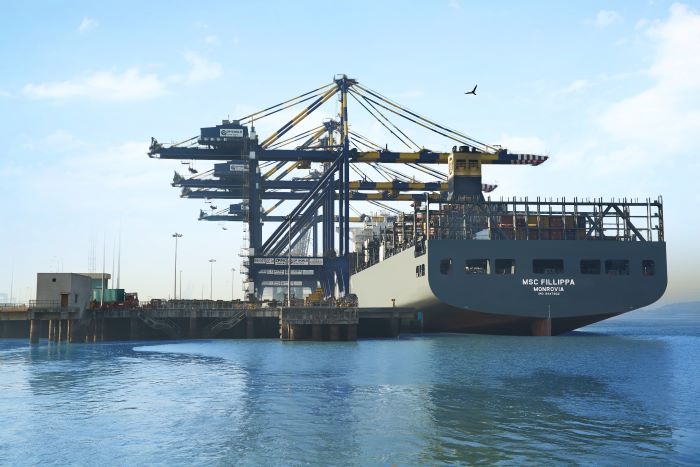 Dubai-based short sea operator Aladin Express has introduced a second strand to its regional operations by connecting Mundra to the Persian Gulf region.

“The GIX service provides another fast and efficient product for customers between the emerging economies of India and the fast-growing and vibrant Middle East,” the company said.

The transshipment cargo handled by MSC and CMA CGM represents the bulk of Mundra’s volume.

“Financial Year Q1 2022-23 is the strongest quarter in APSEZ [Adani Ports and Special Economic Zone] history, with record cargo volume and highest quarterly EBITDA,” APSEZ CEO Karan Adani said in a statement. “This is an 11% jump on the strong performance in the same quarter last year which saw a surge in post-Covid demand.”

He further stated, “The company continued this strong performance in July and recorded 100 MMT of cargo shipments in the first 99 days of FY23, an unprecedented achievement.”

Adani added, “Our strategy to connect port door to customer door through an integrated utility model is starting to bear fruit.

We are confident of achieving our full-year guidance of 350-360 MMT of cargo volume.”

Mundra is about 300 nautical miles from Nhava Sheva port, also known as Jawaharlal Nehru Port Authority (JNPA). The efficiency advantage on the back of modern infrastructure and dedicated rail-highway connectivity has made Mundra an attractive port for northern Indian hinterland transporters and shippers.

While Nhava Sheva users have had to deal with sporadic vacancy calls from some major services, Mundra has not reported any disruption to navigation in recent weeks.