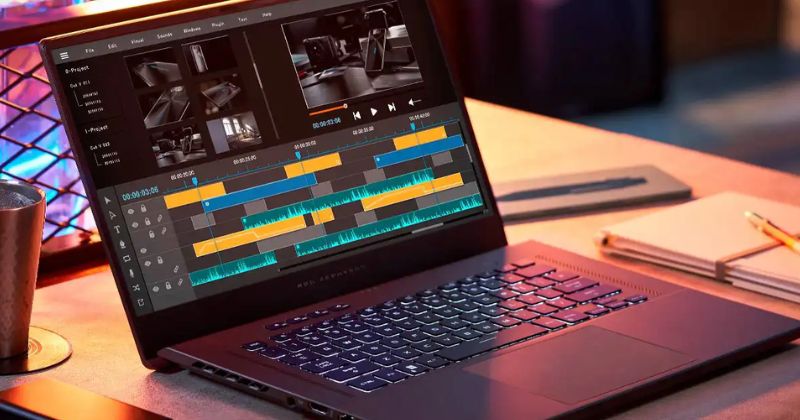 Today, gaming laptops come in all shapes and sizes, but they all have one thing in common — they’re heavy to carry around every day. And finding a model that’s light and sleek without compromising on heat and performance is an uphill battle.

Asus with the ROG Zephyrus G15 aims to solve this, with powerful hardware and an RTX 3070 Ti GPU, in a form factor that is only 2 centimeters thick and weighs only 1.9 kilograms. But does it do it without compromising heat and overall performance? Let’s find out.

Aesthetically, the G15 has retained many elements from its predecessor while also bringing in some new elements of its own.. The white color appears but is not messy to clean and maintain, thanks to a good choice of materials.

The entire machine is constructed from polycarbonate, and has some flex in the keyboard and panel areas, but nothing that makes the quality feel flimsy.

Opening the cover supports the keyboard at an angle, allowing better ventilation as well as a good angle for typing or gaming, which feels so good.

You still get the RGB keyboard (which doesn’t look good on the white keycaps), however, overall the G15 has a subtle understated aesthetic that I think is perfect for those who don’t want to show off that they’re a gamer.

The Zephyrus G15 features a 15.6-inch WQHD panel, with a resolution of 2560×1440 pixels. The panel is an IPS panel and it also sports a 240Hz refresh rate, which is ideal, if you’re training for an esports tournament.

This game on butter feels smooth, thanks to the panel.

It was also very bright when playing against the sunlight from my window. The anti-glare coating definitely helps a ton here.

For those who love to do creative tasks, this panel is also Pantone certified and supports Dolby Vision HDR and that is evident in the almost accurate color reproduction that the panel is capable of.

Overall, this machine has enough ports to be a perfect desktop replacement laptop, especially with its large 15.6-inch display.

It scores well in synthetic benchmarks, but certainly not the best. Playing Cyberpunk 2077 with DX12 and all settings maximized (without ray tracing), the G15 was able to easily touch around 60fps at full HD resolution and around 42fps on average when playing at QHD resolution.

Playing Controls with maximum settings at full HD resolution (without ray tracing) the G15 delivered an impressive average of 79fps. This drops to around 50fps when playing natively on QHD. COD Warzone with 100 percent rendering resolution, natively on QHD is capable of running at around 140fps.

Even demanding titles like Flight Simulator 2020 can run at 45fps at QHD resolution on ultra settings, which is highly commendable.

While gaming too, it manages to keep things cool and quiet. This is thanks in part to the use of Thermal Grizzly’s liquid metal for heat conduction, rather than conventional thermal paste, along with a cleverly designed cooling solution that offers the hardware some wiggle room under great pressure.

Should you buy the Asus Zephyrus G15?

Asus’ Zephyrus G15 manages to offer a pretty solid package in terms of portability, performance and features that any power user or gamer on the go would want.

Of course, the performance isn’t the best, but it’s impressive for the specs on the table and at a premium price point of Rs 2,01,990, it doesn’t get much better than this.

For more in the world technology and sciencekeep reading Indiatimes.com