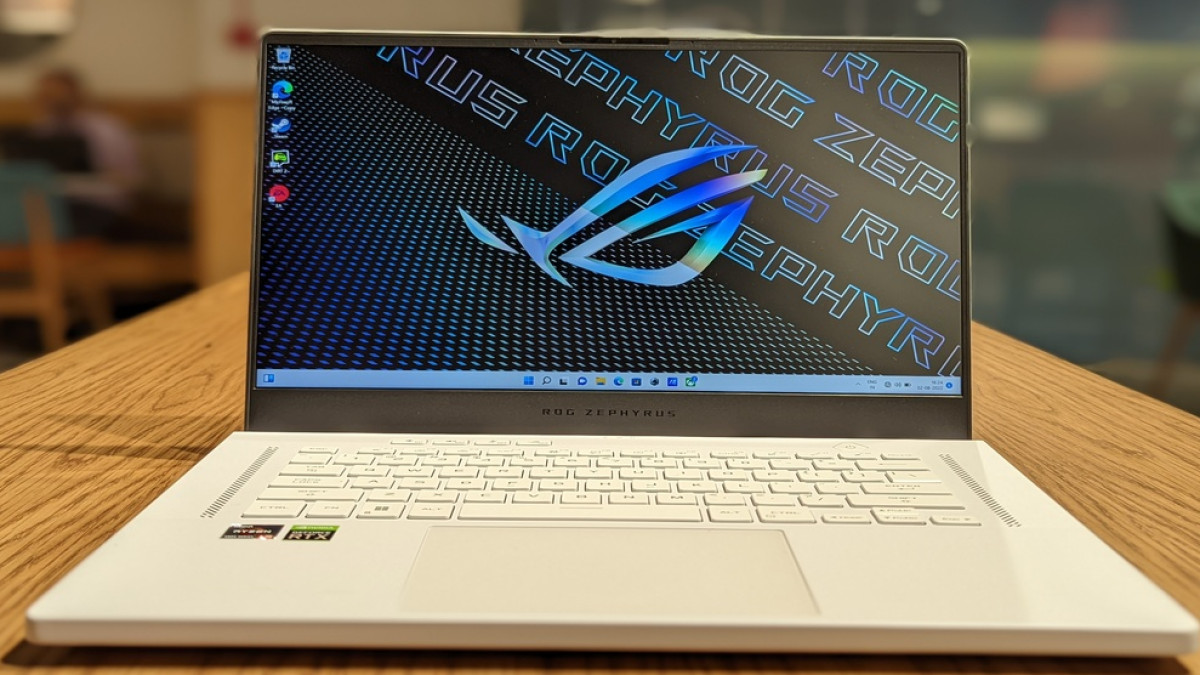 Asus is the best in the business when it comes to gaming laptops. Under the Republic of Gamers (ROG) brand, Asus has several gaming laptops, to suit everyone’s needs. The Zephyrus G series is my favorite among many. The 2022 variant of the Zephyrus G15 might be the company’s best gaming laptop. Zephyrus is known for its portability, utility, great battery life and top-of-the-line hardware. The package is delivered in a beautifully designed and thoughtful package that exudes quality.

The Zephyrus G15 comes in two color variants – Eclipse Gray or Moonlight White – and we got the latter for review. Moonlight White will be an instant winner among its users. It has an attractive appeal and is not too flashy. It’s bold but understated. It’s an all-white design graced with a backlit keyboard. The keys may be white but they have RGB lighting to give them some sparkle. The keyboard has 1.7mm of travel and a “quiet typing experience”.

The downside is that the four hotkeys at the top don’t have any particular use. On the other hand, they take up a lot of space.

There’s an HD camera at the top (with some useful features like noise reduction). The touchpad’s surface area is a touch larger than most competitors and it’s very accurate and fast.

The 15.6-inch QHD (2560×1440) IPS display is the Zephyrus G15’s killer feature. It comes with a 240Hz refresh rate and 300 nits of peak brightness. It trades some brightness and color for a higher refresh rate but that’s what most gamers are willing to accept. It is a Pantone certified display meaning it has great color contrast. It’s also an adaptive sync display for that lag-free viewing experience. Along with support for Dolby Vision, the display on the Zephyrus G15 is something you’ll fall in love with instantly.

I watched YouTube videos and some episodes of Barry on Disney+ Hotstar. I also played several hours of Forza Horizon 5. Driving around the Mexican landscape was an amazing experience. The vibrancy of colors really pops and the lag-free experience ensures I don’t crash due to any hardware issues.

I was a bit disappointed with the keyboard. As a freelance journalist, typing, and typing fast, is what I do most on a laptop. Despite having 1.7mm of travel between the two keys, I found them to be a bit mushy.

Asus has also fixed the keyboard lighting. With the 2022 edition of the Zephyrus G15, we get colorful RGB lighting. The problem is that it is single zone lighting and not every key. The font on the keys is also inconsistent. While it’s good, it’s still far from being the best keyboard in the business.

On the other hand, I feel that the touchpad is a much-needed improvement over its predecessor. It is a large touchpad that is very fast and accurate. It is one of the better ones I have used.

The Zephyrus G15 shines with every click and every keystroke. Laptops can handle all day-to-day tasks.

The Zephyrus G15 features an AMD Ryzen 9 6900HS processor along with NVIDIA’s GeForce RTX 3080 GPU. That’s an impressive combo because I’ve never had a better experience racing the streets of Mexico in Forza Horizon 5 on any other laptop. I also played some Fifa and Halo and didn’t notice any drop in frame rate while I was connected to the mains.

As always, this laptop is not meant to be played on battery, and if you choose to do so, you can expect a few lags here and there.

The MUX switch is something of genius. The MUX switch helps shift the load from the CPU to the GPU smoothly so there is no lag while playing games.

Asus may have worked hard on heat dissipation but it’s not visible. There are 6 outlets to remove heat and some of them are placed next to the keyboard. While playing games, the laptop gets too hot for comfort, meaning it’s not conducive to gaming while resting it on your lap.

However, having said all that, the laptop does not disappoint for a second. No matter what I tried to throw at it, it did so with aplomb.

For a gaming beast like the Zephyrus G15, I was really impressed with the battery life. The Zephyrus G15 packs a 90Whr battery pack and I got a solid 7 hours while doing normal daily tasks. I managed to kill the laptop in less than 120 minutes., but that was while putting it on the streets of Mexico in Forza Horizon 5. The laptop charges quite quickly and can also charge via the Type-C port.

Bottom Line: Look No More For Your Gaming Needs

The Asus Zephyrus G15 for 2022 is the best gaming laptop you can buy. Period. Some may like the portability of the G14 over the G15, but I prefer the larger real estate.

The Zephyrus G15 has great battery life, really rocking speakers, and an excellent 1440p 15.6-inch display (with a 240Hz refresh rate). There are only two drawbacks that I noticed during my use of the laptop: The laptop gets very hot and the keyboard is not up to par (the latter is not important for most gamers).