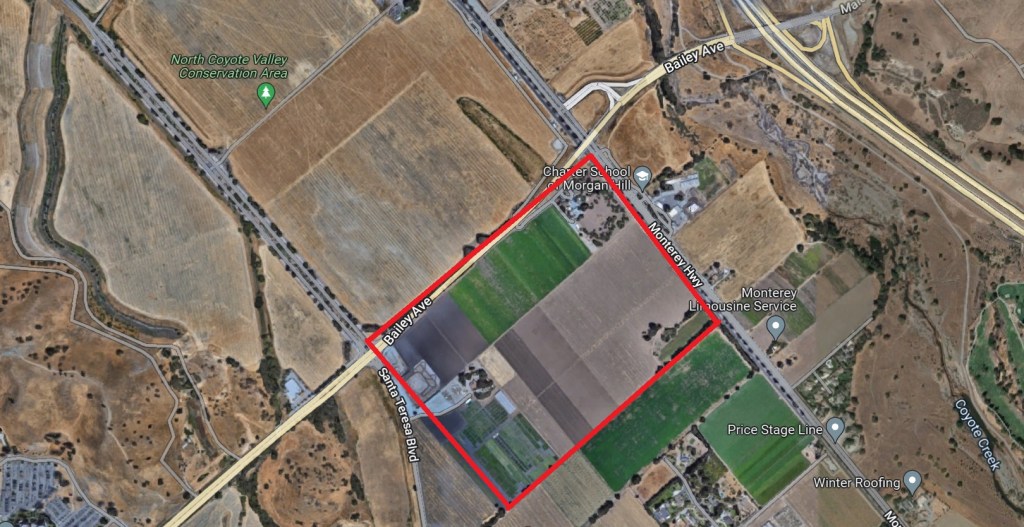 SAN JOSE – A large green energy center is planned for more than 100 acres of farmland in San Jose’s bucolic Coyote Valley on the site where a tech campus was planned decades ago.

The green energy park would be a clean energy facility, a battery facility, or both, and could spring up near the corner of Santa Teresa Boulevard and Bailey Road in south San Jose, according to plans on file with city officials.

The proposed clean energy park in Coyote Valley would connect to the PG&E Metcalf Transmission Substation, which is about 1.6 miles away, a document provided to the news organization shows.

The proposed energy complex would be built on 128 acres with addresses including 8820 Santa Teresa Blvd., city files show.

The potential 128-acre green energy park is notable for being a small part of the “art city” that was proposed 40 years ago in an effort to dramatically transform this section of southern San Jose.

in 1982, San Jose City Council approved the development of tech campuses in 1,400 hectares where as many as 50,000 people would work.

Apple, Cisco Systems and the now defunct Tandem Computers all proposed the creation of large campuses in this area. Eventually plans changed and Coyote Valley remained undeveloped and pristine. The dot-com crash and the resulting economic failure of Silicon Valley in 2001 dealt the final blows to the big picture.

The proposal for a green energy park in Coyote Valley comes at a time when the California Independent System Operator, or Cal-ISO, is taking bids to build two high-voltage direct current lines to serve electricity-starved San Jose.

One of these lines would connect the PG&E Metcalf Substation and parts of downtown San Jose.

That’s where the Coyote Valley green energy park would come in as a source of clean energy for the Bay Area’s largest city.

“The proposed use will help keep the lights on in Silicon Valley during power crises like California experienced a few weeks ago,” Reed wrote in an Oct.

Although the land is zoned agricultural, this type of zoning allows utility areas as long as they have a conditional use permit.

The proposal is in line with San Jose’s long-term clean energy plans, according to Reed, who served eight years as the city’s mayor, from 2007 to 2014.

“The proposed application will allow progress toward San Jose’s strategic goals as adopted in Climate Smart San Jose,” Reed said in the letter.