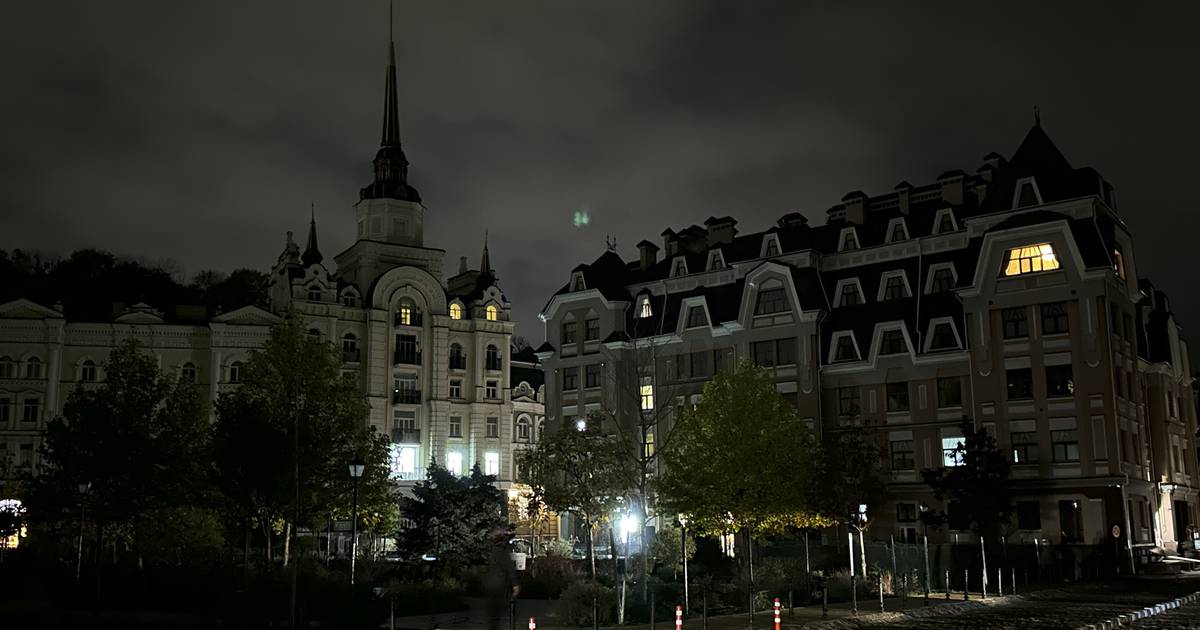 KYIV, Ukraine – The decorative candles Yaroslav Vedmid bought more than a year ago were never meant to be lit, but the dried wax stuck to them testifies to how they were used almost overnight – the result of power cuts across Ukraine.

Sitting at a table with his wife in a village outside the capital, Kyiv, the pair can’t count the number of times they’ve eaten in the dark since a Russian attack caused a blackout in early October. Moscow has clearly announced its intention to target the country’s electricity infrastructure and drive the nation into the cold.

“When you rely on electricity, the worst thing is that you can’t plan… Mentally it’s uncomfortable,” said Vedmid, a 44-year-old business owner in Bilohorodka. The cuts will take a long time — almost 12 hours of blackout a day, he said.

So far, Russia has destroyed about 40% of Ukraine’s energy infrastructure, affecting 16 regions, according to the Ukrainian government.

The latest attack came on Monday, when a massive Russian cruise missile and drone strike hit Kyiv, Kharkiv and other cities, cutting off water and electricity in apparent retaliation for what Moscow blamed on Ukraine’s attack on its Black Sea vessels.

In Kyiv, some 80% of customers in the city of 3 million were left without water due to damage to the power plant on Monday. By Tuesday, water had been fully restored along with some power. Kyiv regional governor Oleksiy Kuleba said 20,000 homes in the region remain without power.

Unexpected power outages are increasing as the government tries to stabilize the power plant and repair the system before winter. The cuts add another layer of angst and uncertainty to a population already suffering from the stress of nine months of war.

To try to ease people’s burdens, power companies publish daily schedules in which neighbors will not have power. But it is inconsistent, especially as the strike escalates. Last week a power station in the center of the region was damaged, prompting an emergency shutdown that prompted the government to warn citizens of severe and prolonged blackouts.

“Unfortunately, the destruction and damage is serious,” Kyiv region Gov. Oleksiy Kuleba said in a Telegram post. “It is necessary to prepare for an emergency power outage for an indefinite period of time,” he said.

Across the capital, residents are collecting heaters, blankets, warm clothes and power banks to charge electronics. While many say they are willing to bear the brunt of wartime power outages, the frequency and flow of blackouts is taxing.

Starting Tuesday, the government plans to change Kyiv’s subway schedule to include longer waiting times to save energy.

On the day The Associated Press visited Vedmid’s house in October, there was an unscheduled power outage for five hours followed by a scheduled one during dinner.

[Inside the growing Republican fissure on aid for Ukraine]

Every time the power goes out, the family loses internet service. Because the village does not have a weak telephone, often the home cannot communicate with others.

Looking at his mobile phone, Vedmid shrugs. Google Maps doesn’t work, and he doesn’t know how long it will take to get to the train station for a planned trip with his wife to the country.

But what worries him the most are the coming months when the temperature can drop to 20 degrees Celsius (he took 4 degrees Celsius). “My biggest fear is in the (cold) season, winter, because now it affects our comfort but it does not threaten our lives,” he said.

The family ordered a generator, which should be installed in December, but demand has increased and not everyone can afford one or the fuel to run it. Diesel has doubled in price since the war began, local residents say.

However, some have found a silver lining to the ban. Vedmid’s wife, Olena, said he reads more books than he regularly updates the internet to see the latest developments in the war. It helps him not to worry.

If not for the incessant shelling of Russia and the lack of repair equipment, many of which must be imported, the damage could be restored in a few weeks, energy experts said.

“The main danger is repeated missile attacks,” said professor Gennadii Riabtsev, chief researcher on energy security at the National Center for Strategic Studies. Residents of cities near the front lines, such as Mykolaiv, Zaporizhzhia and Kharkiv, will suffer the most from the evacuation, he said.

DTEK, Ukraine’s main energy company, has said it has run out of repair equipment. Equipment costs run into the hundreds of millions of dollars.

Russia is likely to continue the war into the winter, hoping to reduce Western support for Ukraine and “freeze Europe into submission,” according to a report released this week by the Center for the Study of War, a Washington-based think tank.

Residents near the front lines say they are facing a worsening situation.

Mariia Chupinina was dealing with blackouts in Kharkiv even before the blackouts started this week. A woman who raises orphaned children lives on the fifth floor of an apartment building and takes care of four babies under 12 months old. When there is no electricity, it is impossible to heat the house, and every time they go, they have to walk down five flights of stairs in the dark, he told AP by phone.

If Chupinina forgets to plan ahead, the babies will have nothing to eat. “If you’re not prepared, you don’t have time to fill a Thermos, and there’s no hot water or formula,” he said.