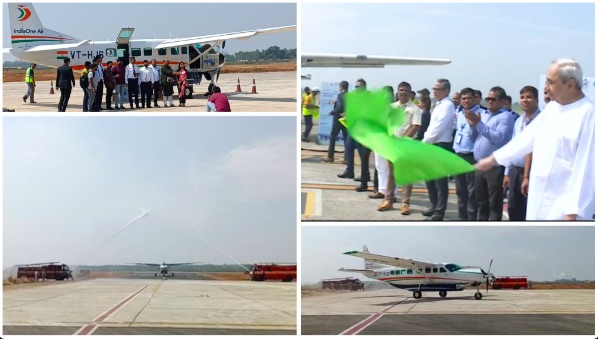 Bhubaneswar: Chief Minister Naveen Patnaik flagged off the expected Bhubaneswar-Jaipore direct flight under the UDAN scheme at Biju Patnaik International Airport (BPIA) at 10:30 am on Monday.

On arrival at Jaipore Airport, he was greeted by a water cannon from the Odisha Fire Service.

The service operates six days a week, with only one flight each day carrying nine passengers. The ticket price will be Rs 2,500 per passenger, sources said.

Ahmedabad-based Indian Air, which operates flights from Bhubaneswar to Jaipur, has announced a promotional offer of Rs 999 till November 9.

Notably, the Jaipur airport was granted permission for airport operations by the Directorate General of Civil Aviation (DGCA) on October 20 under the Ude Desh Ka Aam Naagrik (UDAN). Road about 1 hour and 45 minutes.

The airport was built in 1962 along with the establishment of the Hindustan Aeronautics Limited (Hall) factory near Sunabeda. In the year In the 1980s, Vayuduth operated a daily flight to Bhubaneswar via Visakhapatnam. In the year It was upgraded to an airport in 2017 under the UDAN scheme.

Get real-time updates directly on your device, subscribe now.