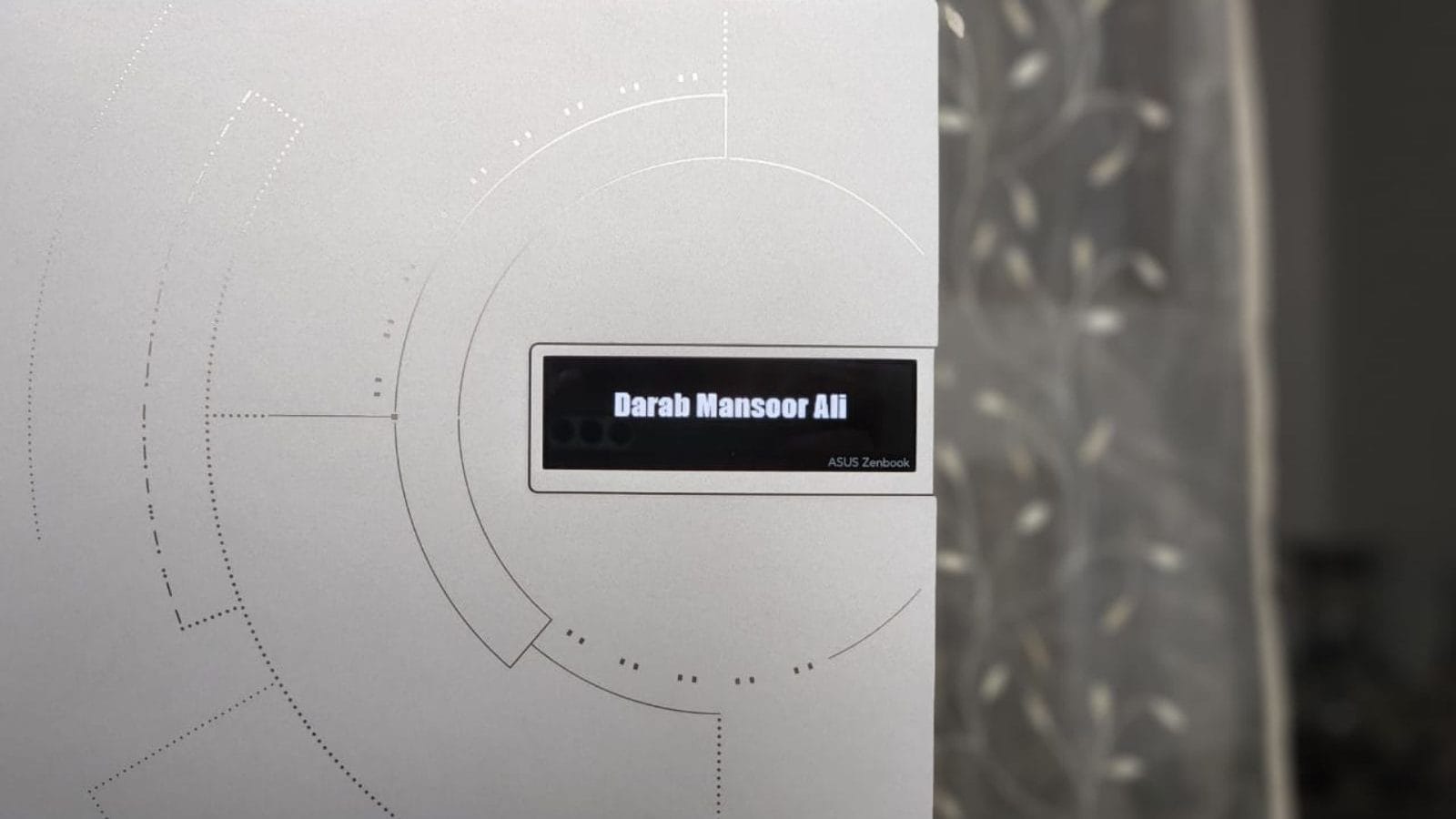 Asus was one of the first PC makers to send a notebook computer into space aboard the now-defunct Mir Space Station. The Asus P6100 was the first laptop to go into space and return with zero defects after 600 days in space. Now some 25 years later, the company is still one of the leading PC makers, and to commemorate the P6100 laptop, Asus launched the Asus ZenBook 14X OLED Space Edition laptop earlier this year.

In terms of design, the Asus ZenBook 14X OLED Space Edition looks stunning. Given the space-themed design, the laptop comes in a titanium color that the company calls the “Zero-G Titanium” color. This laptop is very thin at only 15.9mm wide, and very light at only 1.4kg. The Asus ZenBook OLED 14X Space Edition is made of space-grade aluminum. There is morse code and embossed graphics all over the laptop which adds to the overall space theme of this laptop.

Furthermore, there is a second display on the laptop’s flap, which is a 3.5-inch OLED display and can be customized to show anything you want – whether it’s your name, a photo, your logo or anything else you want to display. The keyboard also has a highlighted space and the power key, which is a bronze color, brings a certain contrast to the keyboard. There are also minimal bezels around the display, which looks premium. In terms of design, the Asus ZenBook OLED 14X Space Edition is one of the best-looking laptops on the market right now.

The display on the Asus ZenBook 14X OLED Space Edition is a 14-inch touch-sensitive panel with a resolution of 2880×1800 and a 90Hz refresh rate. The display is very bright and sharp. It is also very bright and using the laptop outdoors is not a problem. Color accuracy is also excellent with DCI-P3 color gamut support, and you’ll enjoy watching movies or YouTube videos on the ZenBook 14X OLED Space Edition.

It is a responsive display with a 90Hz refresh rate. The 90Hz refresh rate makes the experience of using the Asus ZenBook 14X OLED Space Edition quite smooth, and scrolling through items is precise and smooth. Touch also works well, however, it’s a bit non-standard, and mostly ignored by users (but still nice to have). The display on this laptop is crisp, clear, bright and very responsive.

In terms of performance, the Asus ZenBook 14X OLED Space Edition has enough juice to handle most high-performance tasks. This laptop is equipped with a 12th generation Intel Core i9 processor paired with up to 32GB of RAM and 1TB of SSD storage. For our review, we got the 32GB RAM variant, and in terms of performance, the laptop performed as you would expect a high-end Windows laptop to perform. It doesn’t come with a separate GPU and uses Intel’s integrated Iris Xe GPU, but you won’t feel the lack of a solid GPU, unless you’re trying to play games on the ZenBook 14X OLED Space Edition.

I used this laptop as my daily driver for three weeks, and during that time, it performed well and never felt sluggish. I used the Asus ZenBook 14X OLED Space Edition for work such as typing, researching, tracking news, editing photos and videos, and throughout all these tasks, the laptop never showed any sign of slowing down. Of course, in the longer term, you might feel that it doesn’t have a GPU, and I’ve tried running games on this laptop, and even though it’s capable of running triple A titles, the gaming performance isn’t as good as you’d expect from a laptop. games with a proper Nvidia GeForce GPU.

Now, while it might not be the best laptop for gamers, it’s definitely one of the better Windows laptops for creators and professionals. Performance, for the most part (aside from gaming) felt like overkill, and the laptop felt like it wasn’t going to slow down anytime soon, at least when being used as a daily work laptop.

The touchscreen does add convenience, but it’s also one of the least used features throughout my review. Furthermore, Asus’ virtual numpad that pops up on the trackpad with a click of a button is also a very convenient feature and is a great way to integrate a full-sized numberpad while maintaining a slim and light profile. This, however, is prone to mistouches, and I often found myself accidentally turning on the number pad.

Asus ZenBook 14X OLED Space Edition comes with a 63WHrs battery, which lasts about 4 hours on a single charge. That, in my opinion, is a bit disappointing because there are better and more durable laptops in this segment. In fact many gaming laptops today offer longer battery life than the Asus ZenBook 14X OLED Space Edition. The laptop uses USB type-C for charging, which is nice, and comes with a 100W charger in the box. Charging speed is good and it doesn’t feel slow by any definition.

The Asus ZenBook 14X OLED Space Edition is one of the best looking thin and light Windows laptops out there right now. It offers many features that other laptops don’t have, such as a customizable secondary display (which is useful because it shows important information like battery life, time, and more), a touch-sensitive display, and a space-grade build. The laptop also has one of the better displays, and there is enough power to handle all kinds of tasks including gaming. However, the battery life is disappointing, and that is something that is very important to users.

So, should you spend Rs 1,69,999 on the Asus ZenBook 14X OLED Space Edition? Now, I believe that there are better options on the market at this price point, but none of them offer anything new or different like this. The laptop looks and feels different from the moment you lay eyes on it, and it doesn’t disappoint in terms of quality and performance.