Today, October 5, there will be many events to show the victory of good over evil in Dussehra celebrations and the burning of the effigy of Ravana. In other places, there will be special preparations for immersing the clay images of goddess Durga after celebrating her victory over the demon king Mahishasura. These festivals often involve millions of Indians within and outside the borders of India. Beautifully decorated puja pandals are visited by villagers, just as the audience at Ram Leela shows consists of villagers. This was the case in the past.

But will it last? Will there soon be signs outside pandals saying “Hindu Only”, like the signs in British India banning Indians from many public places? If a pandal in Kolkata can actually depict the demon king killed by the Goddess in the form of Gandhi-ji, is the idea of ​​a “Hindus Only” sign board so different? Vishwa Hindu Parishad spokesman Chandrachud Goswami, responsible for the abomination, is neither shy nor defensive. He said, “Gandhi should not be respected. We want to send a clear message that we want a Gandhi-mukt Bharata Varsh.”

India needs to ask itself some difficult questions – in our own time, in our own society, does evil triumph over good? Probably not. The Indian people, the poor workers, the workers, the kisans, have chosen in history, more often than not, the path of working for what is right, against the forces that want it enslaves us, it divides us, it perpetuates injustice. . But today, it’s no ordinary fight. Every day brings new examples of why the question is relevant. See recent events in “garba” celebrations.

A group of Muslim men were beaten up in Gujarat’s Kheda district over a dispute over a garba event.

The thrashing of Muslim men in or near “garba pandals” by the private forces of the Hindutva brigade is tantamount to setting fires of the Constitution. The attacks have an unprecedented level of religious overtones. It is a disgrace to destroy an entire community of terrorists, of women, of ‘loving jihadists’. In all these attacks, the police have announced that there are no complaints of harassment by women participating in the garba events. The accusation against Muslim men of “tempting women” is also an insult to Hindu women, who must also be considered brainless if they are easily “seduced”.

Such attacks are taking place in centers in BJP-ruled Gujarat and Madhya Pradesh. Instead of arresting the attackers led by the Bajrang Dal and, in some cases, the Vishwa Hindu Parishad, the police have arrested the victims. Since there was no evidence of any crime against those arrested, the police resorted to Section 151, an open clause, which provides to the police the right to make arrests without evidence or proof of crimes committed but to “prevent the commission of cognizable crimes”. . It reads “(1) A police officer who is aware of a plan to commit any cognizable crime may arrest, without an order from a Magistrate and without a warrant, the person he plans, if it seems to the official that the crime cannot be committed. “Hindutva thugs have expressed their intention to use the current religious festivals to target Muslims, they are the people ‘ it is very planned’. National television, already recorded by the police, is known to have aired parts of the police department. Madhya Pradesh.

The leader of the Bajrang Dal in Indore, Tannu Sharma, said that Muslims are not allowed in the garba pandals. He was said to be “Pehle rokenge, pair tokenge, phir thokenge(We will arrest them, then threaten them, then beat them). Pragya Thakur, Member of Parliament and accused in the Malegaon bombing case, said, “Muslims should not be allowed inside garba pandals”, and another, “Muslim-owned shops near pandals are should be closed”. The Minister of Culture, Usha Thakur, echoes the Bajrang Dal, saying “Garba pandals have become an avenue for love jihad”. This was followed by the statement of the Minister of Government, Narottam Mishra. “Proofs required to enter pandals”. In compliance with his statement, orders to enforce ID cards were issued by district authorities in Ujjain, Bhopal, Indore, Narmadapuram and Khandwa. Official government approval, let’s not fool ourselves into being “leftovers”.

Madhya Pradesh has a high crime rate in sexual assaults against women. If there are goons, as is often the case, in such public events where there may be many young women, the police must ensure their arrest and the protection of the women. Identity cards do not show criminal history records – only the name and address of the person involved. The requirement for identity cards does not protect women, it only humiliates the members of the minority community. Most of the pandals are on public roads, so at any time, there may be people of the Muslim community passing by. They were also reported to have been subjected to violence and physical attacks. In Indore alone, 14 members of the Muslim community were arrested.

In Gujarat, the Hindutva brigade gave instructions on setting up garba pandals against the government’s authority. Hitendrasinh Rajput, the spokesperson of the Bajrang Dal and VHP, declared that “Bajrang Dal has ordered all of them to organize to ensure that no security personnel are recruited to join the Muslim community. because they have malafide intentions to attract Hindu girls. after that, such conflicts will occur.” This was his confirmation when his gang attacked Muslim security guards at a garba work in Surat. The Bajrang Dal announced that its men would ‘check’ to ensure that there were no Muslims in the pandals. If the Hindutva brigade can act with impunity, it does not require a study by a political scientist to prove that this is a clear example of state support for illegal activities.

All these ten years, “garba” celebrations like celebrations and other religious festivals were celebrated by people of all villages. But after the coming of the BJP government in 2014, there has been an increase in the number of religious festivals that have become a time to create and deepen the fault lines between communities. In Gujarat, where the garba culture originated, Muslim music has long been associated with entertainment. In 2015, there were incidents in Ahmedabad where Muslims were excluded from garba celebrations. At that time, not “love jihad” but “cow eating” should be banned from pandals. Achyut Yagnik, a famous writer and researcher of Gujarat society in an interview (Economic Times, Oct 10, 2015) said “The Muslim ‘Mir’ or ‘Langa’ community was always associated with music in Gujarat and their members participate and play music in Hindu temples and festivals. In recent times, Mir singers, men and women, have become very popular and are invited to sing during Navaratri in towns and cities. different.” He criticized the situation of preventing Muslims from celebrating. 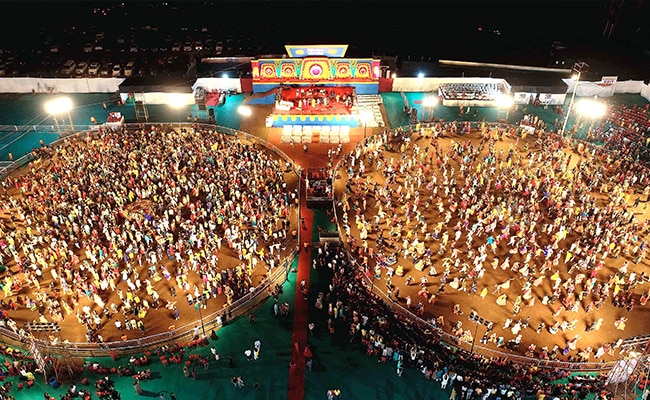 Public controversy surrounding the festival has grown in recent years.

Since 2015, the situation has worsened with various attacks. Along with buying entertainment, the big garba events where Bollywood stars are invited are organized by professionals, many of whom are organisers. Muslim. They are not allowed to coordinate these things. Events that require safety precautions. Some police officers are Muslim workers who lead a pious life. This has also been stopped. Shops are closed because they are owned by Muslims, workers are prevented from going to work because they are Muslim, legal entities are banned from providing professional services because they are Muslim – this is a direct attack on livelihood. .

A few months ago, during Ram Navami, we saw a concerted plan in action when people chanting slogans led by the same organizations – the Bajrang Dal and the VHP – rioted all over the country. deliberately provoking conflict outside the mosques at the time. when the Muslim community observes ramzan. Hundreds of Muslims were arrested and many are in prison. Bulldozers were used to destroy the properties of the Muslim people down there but the insurgents got away with the support of the government. Today, the navratri or puja celebrations are sought to be used to achieve the same goal of destroying a community, dividing society and destroying culture.

The symbolic actions of burning symbols that represent evil will have more meaning if we have the heart and determination to identify, recognize and resist the forces of darkness within us.

Disclaimer: These are the personal views of the author.